I keep thinking about our corrupted Supreme Court’s decision that corporations are now persons.  That decision was designed by the Supremes to allow corporations to donate unlimited cash to the republican fat cat candidates. Never mind that it remains an absurdity on its face. Justice Scalia cares not about such things as logic and sense. He cares only about electing republicans, as when he appointed a republican, George W. to the presidency.


But I keep wondering how we, the non-fat cats of the world, could use his inane decision to benefit non-fat cats. Then it came to me. If banks that commit patent fraud against the people, or their shareholders, or people buying investments designed by the bank to defraud, why can’t we bring such corporate-persons to justice? You know, convene a Grand Jury to indict, say Citigroup for its fraudulent one billion dollar investment deal that screwed a whole bunch of ordinary people. Yeah, I know, they have been fined $280 million for their dishonesty. But that means they’re still left with over $700 million in dollars that represent a fraud. Or how about the banks and other corporate entities that, by screwing with their retirement funds, have managed to rip off their retirees and future retirees, by taking money out of the retirement funds to pay very healthy payouts to their execs, while simultaneously claiming that their pension funds cannot pay out necessary retirement packages for ordinary folks? Their actions there may also be fraud.
Now, as I best understand it,  fraud can be a felony offense.  And yes, fraud is not easy to prove. Still, it would be healthy were we to indict, say, a Citigroup for fraud and force them to defend themselves against a local or Federal law enforcement agent. Now, it brings me to wonder about who we might commit to the slammer, were we to be able to indict and then convict, say, Citigroup of major fraud.  I would assume the agents of that “person” would have to stand-in, i.e., be incarcerated as the living incarnation of the Citigroup person. Otherwise, Citigroup could not be viewed officially as a “person” under any meaningful definition of person (not that Justice Scalia cares such things).
It is fun just to think about Citigroup facing time in prison.  I assume, incidentally that, being convicted of a major felony, the Citigroup person(s) would lose their licenses to continue in the banking business.  That in itself, might be useful outcome.
And on that other planet known as the Strange Land of Cain,  the Godfather of lousy pizza, Mr. Herman Cain has proposed a very basic tax structure, he calls the 9-9-9 plan. He boasts that it is simple. Of such plans, H.L. Mencken once said, “For every complex problem, there is a solution that is simple, neat, and wrong."
Posted by artful notes at 2:11 PM No comments: 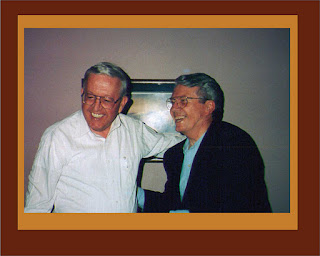 October 18th – that was yesterday of course.  But October 18th, 1931 . . . that was a while ago . . . 80 years to be exact. So, yesterday, my brother William would have reached 80 years. We always joked that he was 4 years older than me . . . on his birthday.  But he never made that big number, 80, for he is now gone.  But I think about him often.  He remains the most important man in my life, since he was always forging a path for me to follow. Arguably, we had no father to do so, and Bill picked up that mantle.
When I see our grandchildren being fathered properly, I smile, because whether they are girls or boys, a father’s influence will later be cherished, as a Mother’s.  So, William, I don’t know whether you are simply forging another path for me or that perhaps your energy has just been transformed into another form. We know that energy is always conserved, neither created, nor destroyed. So, your energy remains somewhere in our universe. And your life was full of your energy. That energy spurred me on, I continue to thank you daily William. While you were a man, you were a good man. Now, I hold you fast in my own mind.
So, thanks Wiiliam for all you were and are.
Happy Birthday.
Posted by artful notes at 10:09 AM No comments:

Email ThisBlogThis!Share to TwitterShare to FacebookShare to Pinterest
Labels: Remembering

In Pursuit of Efficiency in the Private Sector

I’ve been thinking a lot about this great debate going on in our nation about Capitalism vs. Socialism, and about the ostensibly greater efficiencies achieved in having the private sector do stuff vs. the government doing that same stuff.  I should first note that the TeaBaggers and others of that ilk, who keep yelling that Obama is a Socialist really need to get a grip. I assume they keep yelling stuff like that because, well they’re just not very smart.  Most of them don’t really know what Socialism is in any meaningful sense.  Socialism basically means that the “means of production” are centrally owned, i.e., by a central government.  In only a very few countries has socialism been tried in a pure sense, e.g. the Soviet State and a few others of that ilk. Generally, they have not been notably successful. A lot of the problems seem to stem from that old Russian adage, “we pretend to work, and they pretend to pay us.”

If St. Ronald gave us a first brush with an intellectually challenged president, we can say with confidence that George W. Bush was our first truly stupid president. Unquestionably, Ric Perry would make Shrub fade into the background of stupidheadland, since Perry seems to be intent on demonstrating that Bush wasn’t so bad after all.

In olden times, Republicans might have had scary guys as President, for example,  Richard Milhouse Nixon, but they never seemed terminally stupid. Now, for whatever reasons, Republicans seem to prefer their candidates either really stupid, really crazy, or both (see Michelle Bachman).

But Democrats have come up with an entirely new category -- naivete. Who would have ever considered a naïve president? Well, it would seem in President Obama, we have our very first naïve president.

Naïveté or naïve can be defined as:
Lacking worldly experience and understanding, especially, a. simple and guileless; artless as in a child with a naive charm; or perhaps, b. Unsuspecting or credulous.

How else should we characterize our current Democratic President? Somehow, he keeps thinking, "if I give them something nice, then perhaps they’ll play nice." Then they kick him in the nuts. Presidents such as Lyndon Johnson would smile just before he hit his opponents across the forehead with his ever-handy 2 x 4. Then, having gotten their attention, he would help them up, smile and tell them how things were.

Barack Obama, after having been kicked in the nuts, smiles, gets himself up and then asks what else he can do to help his opponents. Jon Stewart showed an interesting clip of a talk by The NRA’s chief sociopath, Wayne LaPierre. His talk took place after the Feds gave up some more goodies to the gun lobby. But, not appeased, Mr. laPierre instead spoke about how the President was trying to sucker them into believing he would play nice, but he was really all about taking their guns away and imposing his own nightmarish police state on all the nice gunners in the country. Talk about paranoia.

But the NRA rant was really just one small part of the larger republican strategy whereby they will never "play nice", regardless of what our president says or does. And our president doesn’t seem to get that. He keeps thinking that he is dealing with rational people who have the good of the country at heart and so will act accordingly. Instead, he has the equivalent of terrorists who no longer care whether their actions damage the country -- they don’t care Barack!! They might as well have dynamite strapped to their middle.
But our president keeps on, thinking, or maybe just pretending, that good will is just around the corner.

I guess this first term has been instructive to our president, and to the nation in general. It is now clear to one and all that republicans who created that house of cards and then brought it down, now wish to return to their glory days of the George W. Bush era, when War was on, and corporations could do anything they wished. Or maybe they just wish to return us all to that late great era when robber barons roamed the earth and we had just two classes the very rich and everyone else.

So, President Naïve, maybe it’s time to awaken to our real world. We need help. Republicans are out and about trying desperately to crush everything that is/was good about this nation. Wake up, man, and smell the roses, before they’re all dead. And, by the way, how about this? So long as the republicans plan to say no to anything and everything you say or propose, then why not begin saying and proposing what you really think is right? Quit trying to play nice. Perhaps they (and we) might grow to respect you more.

Posted by artful notes at 9:12 AM No comments: