Wow, a truly historic and amazing decision. With Roberts siding with the four thinking justices, they have now accorded constitutionality to Obama's health care law. How good must that be for the 40+ million previously uninsured? Maybe now, Mr. Scalia will take EJ Dionne's advice and retire from the court to resume his political career out of the closet--he may be the first openly "closet-republican" now outed.
But enough of the SCOTUS dregs (aka Big Tony). We must applaud Mr. Roberts and his four colleagues for considering the totality of the issues facing the Nation and come down on the side of rationality, as well as the ultimate good of the American people. Perhaps now we can consider moving the issue along to begin thinking of a true single payer system, in which we move insurance companies out of the decision mix. Now that would be truly monumental.
But, for the moment, we should take our wins as they come.
Thank you Mr. Roberts and your thinking colleagues.

Posted by artful notes at 12:50 PM No comments:

Email ThisBlogThis!Share to TwitterShare to FacebookShare to Pinterest
Labels: SCOTUS

Maureen Dowd had an interesting column in the NY Times yesterday. She speculates on the possibility that the Nation’s moral code is slipping down that old slippery slope. Her two main examples are Jerry Sandusky, and the Catholic Church, with its Nazi Pope and pedophile priests. It seems increasingly clear that there are no heroes in either case. People knew what Sandusky was doing, among them that old patron saint Joe Paterno, and they turned a blind eye. In the Catholic Church, the damage was worse, given the fact that higher-up church officials, perhaps up to and including his majesty the pope(s) knew and simply transferred the pedophiles to other unaware parishes. Clearly, the Catholic Church no longer enjoys any moral authority. And now, Penn State has joined the ranks of the “see-no-evil” institutions.


Ms. Dowd’s vision of us slipping into a moral dystopia assumes we weren’t already there. I actually see no slippage. Instead, I see a periodic drawing back of the Oz curtain, to expose the wizard at work. Only in this case, we periodically expose the morally corrupt segments of society. Those segments are always with us. But being Americans, hopeful ever, we wish to be lied to. We actually insist that our corrupt societal segments lie to us. How else to explain the continued existence of the Catholic Church? How else to explain the many Penn Staters rushing to defend the character of Jerry Sandusky and the Penn State officialdom?  Indeed, how else to explain Rupert Murdoch’s Faux News Network, the largest cache of lies ever to masquerade as a news network?
As yet another example, we have Madame Governor Nikki Haley’s legal team that has come up with that neat defense of her apparently unethical behavior—everyone in the South Carolina legislative system practices such unethical behavior, so how can anyone criticize her? Don’t you love it?
So, as we enter the serious stage of our presidential political season, we really need to understand that our officials, be they public or private sector, often will simply do as they wish, without regard to the moral implications of their actions.  Whether their actions including raping innocent children, raping the environment, or stealing from the public, they will not be stopped, until we agree to stop them. So long as we are content to keep the curtain closed, allowing the wizard to practice his tricks, we will all be exposed to potential grievous harm.
Societies will be judged by their treatment of the most vulnerable among us.  We all can act in ways large or small to bring about an ethical society. We need to keep foremost in our minds that not to act in the face of evil is to collaborate with that evil.
Posted by artful notes at 2:44 PM No comments:

Email ThisBlogThis!Share to TwitterShare to FacebookShare to Pinterest
Labels: Dystopia

Fathers’ Day is a special day for us guys, at least the ones of the Father set. It always makes me think back to when our children were little ones and fathering often meant holding a little one to shelter or just cuddle. But it was after the kids were no longer kids when a different set of joys began—the ability to talk as adults, with the full understanding that your kids had/have an independent view of the world, and that you really don’t know everything. When they leave the nest, you hope that they leave as prepared as possible.  When grandchildren arrive, a new realization sets in. Although you now have new loved ones, you also have different responsibilities.  Your children are now the principal caretakers of this new generation. It is not that you have no responsibilities to the new generation, but your responsibilities are not those of the parents. So, again, you must enter a different relationship with your children, now fully adult.


Because I guess we all need to think of ourselves as all wise and all knowing, these new relationships are not always easy to engage, or free of problems. What we hope for is that our children will lavish the love and the care that all children need to become fully functioning adults and, as importantly, partners and eventually parents of their own little ones.
So, having reached an age at which I can see three generations ahead, I am happy that the process continues to play out and I can see that each successive generation that has followed me is forging ahead to become successful adults. And all this reminds me of a saying attributed to that wise old man, George Bernard Shaw:
“Life isn’t about finding yourself. Life is about creating yourself.”


May all the generations ahead rediscover the essential truth therein.
So, til the next Fathers’ Day, Ta ta . . .
Posted by artful notes at 10:19 AM No comments:

So the Mittster now thinks it’s ok, maybe even desirable that our Constitution should redefine the requirements for Presidential candidates to include at least three years business experience.  I guess that’s to assure that we might have more candidates like himself, Shrub, and that old Republican favorite Herbert Hoover.  I mean, his requirement would eliminate one of their standard bearers, St. Ronald, as well as Ike, but what the hell. It would also, of course, eliminate FDR, JFK, Bill Clinton (the last guy to produce an actual budget surplus) and Teddy Roosevelt.  But Joe the Plumber would be OK. And, of course, The Donald, one of the Mittsters most vigorous supporters.


I suppose, since he wants it inserted into our Constitution, we would need to define what he means by “business experience”. I mean, would he include my picking corn and tomatoes as a 13-year old in that definition? I figure my summer jobs alone would almost give me the prerequisites.  Does babysitting count?? Surely, my summer jobs would count at least as much as being a banking CEO who led the country over a financial cliff.  And would you have to have been rated as “successful” for it to count? So, would Shrub’s experience in Texas, during which he tried and failed to find oil be counted?? And does playing the part of a delusional psychopath on the Faux News Network count? See, we would really need to get specific here.
So, Mitt’s suggestion may still need some work. But good going, boy, at least it’s a sign that you’re not yet brain dead.
But, I would like to return to another area of inquiry. It has been suggested by some wag that the Mittster may actually be a unicorn—you know, one of those mythical creatures, shown below without his human disguise: 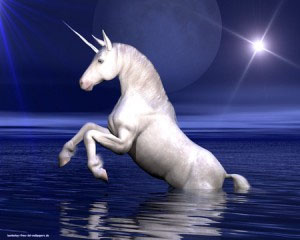 I grant you that I am not sure that the Mittster’s big hair style hides a unicorn’s horn, but hey, what do I know?? Something like 25,000 people in Arizona have raised the question, so we need to at least consider obtaining some evidence. After all, I am told that:
So, I guess it wouldn’t hurt to be sure. Maybe we should ask Mitt’s Mexican family whether any of them married a unicorn.  Couldn’t hurt.
Always thinking.
Posted by artful notes at 1:57 PM No comments: