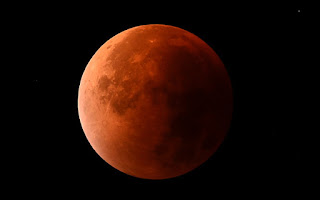 It is said that a Super Blood Moon is a sign of the coming apocalypse, that the “end times” are upon or at least near us.  And the more I pay attention to the republican gong show, the greater is the seeming threat posed by the end times scenarios of the Christian doomsayers.

When I observed the actions of that cretin, Martin Shkreli, who raised the price of a drug called Daraprim, used by some AIDS patients, from $13.50 a pill to $750. I thought of end times. Is this really what we have come down to . . . a nation whose capitalists thrive by punishing the poor and the sick??? Surely that event, not the hapless Blood Moon, is the sign that we are headed to oblivion.  And I’ll bet he, like many of his republican friends, really hates the Pope who keeps preaching almost as though he is an actual Christian.  Francis has some nerve, talking about Climate Change, and income inequality. How long will it be before he begins preaching about tax policy and how we need to begin once again taxing the very wealthy, who now hide their vast income through various legal and barely legal tax dodges? Even the Curia would denounce him then. Well, to be fair, the Curia seem to hate him even without such taxation preaching. I suggested that the Pope consider emptying the Vatican bank accounts and distributing the proceeds to the poor. I even wondered how much he could get for the Vatican itself—I mean the Sistine Chapel should fetch a couple of billion, right?? Think of how many folks could be fed by that wad of cash.

But in the meantime, I guess we will have to console ourselves with hating the likes of the Martin Shkreli’s of the world . . . and he is by no means alone. And we can continue tuning into the Gong Show to see who jumps off the roof next. I’m predicting the next to go will be the clown from South Carolina, Lindsey Graham. I mean, he didn’t even have the flair of that Walker Dude who left the stage to jump off the nearest available tower. Hey, I know, maybe Lindsey could jump off the Eiffel Tower, right after he addresses the French people on the true meaning of Freedom Fries. 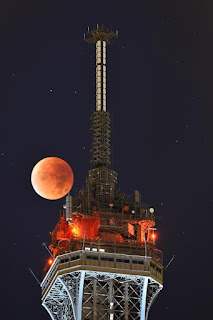 Now, Mike Dingleberry (Huckabee to those who don’t know him that well) may take a bit longer, since he, doubtless, was called to run for the republican candidacy by no less than the Dude in the clouds.  So, he won’t acknowledge that everyone hates him for a bit longer. Those rendered stupid by religion learn really, really slowly.

The bigger question is when Dr. Ben plans to leave, and why he is running at all?  Aside from that separating brains thing, he seems to have no talents whatsoever. It’s really quite astonishing how anyone could be so talented in one relatively small (however important) subject, while remaining abjectly ignorant of all the rest of our universe (he actually still thinks the earth is only 6,000 years old).  But really, why would someone with his brain want to cope with all the crap of being President? I mean, Air Force One isn’t that wonderful.  Maybe he just loves the idea of pushing that button, unleashing the fires of hell on the earth. Scary dude is the good doctor.

I think we can all ignore most of the rest of the crowd of clowns, most of whom will quietly disappear, one by one until . . . and then there was one. And who might that be, you ask??? Why The Donald of course. Since the Presidency is the ultimate Reality Show, who better to challenge the Hillary & Bernie Show than The Donald?

Stay tuned folks.
Posted by artful notes at 11:26 AM No comments:

In The Art of War, Sun Tzu is often quoted: “Know thy self, know thy enemy. A thousand battles, a thousand victories.
During this past year, we have been able to observe both sides of the debate regarding the Confederate flag, flown frequently throughout the South. Mostly, we observe that flag on license plates and bumper stickers. The raging arguments that occurred publically mostly concerned flying the flag on public, often statehouse grounds. Following the racist shootings by Dylann Roof at an Emanuel African Methodist Church in Charleston, the flag arguments became open and vocal, with protests mounted to take down the flags.
The standard southern response to the outrage surrounding the flag has always been . . . oh the flag has nothing to do with racism; it simply is a symbol of southern heritage. But that line of argument has little basis in fact. The Confederate battle flag represented the southern rebellious armies. And what were those armies attempting to achieve? They were after the secession of southern states from the Union that would allow a new federation to be constituted. And in what way would that southern federation differ from its northern cousin? Why slavery, of course, because slavery was at the heart of the Civil War.

So, if the flag symbolizing a protest movement to retain slavery, it then follows that the symbol of the armies so engaged—the Confederate flag—is in fact a symbol concerning racism, the underlying core of slavery.

Having said all that—it has all been said before I realize—I come back to my original thought—“know thy enemy”.  Setting aside the issue of flying such racist symbols over public properties, I have now concluded that folks who display that symbol on their property are in fact announcing to the rest of us that they are openly racists. It is equivalent to someone flying the Swastika over their home, signaling that Nazi’s reside therein.  Recently, I came around a corner in downtown Concord, and saw this image. 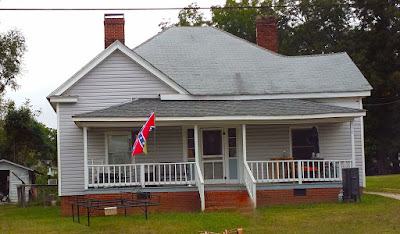 At first, I thought, oh you little . . . .. But then I thought, well, this display provides the rest of our community with valuable information—the family living therein is telling all of us that racists reside there and we should act toward them accordingly.  It is all in the best tradition of Sun Tzu’s “know thy enemy”.

Posted by artful notes at 12:03 PM No comments:


Kim Davis seems to bring out the stupid in people. Or maybe, just maybe, she brings out their native instincts. Ms. Davis, married four times, with a couple of kids out of wedlock, seems to hold no serious moral standards. That marriage = one man and one woman things seems to have escaped her, as did the no kids out of wedlock thing. But on Gays, she has been told by the great daddy in the sky that Gays cannot be allowed to marry. Three possibilities here. One is that she actually heard voices telling her to deny marriage licenses to Gays and Lesbians. In that case, Ms. Davis clearly needs to be on serious medication, and perhaps even placed under supervision in an asylum for crazy people.


The second possibility is that Ms. Davis read somewhere in that bible thingie that Gays are a no-no. Seems doubtful that the bible specifically mentioned Gays and marriage, but since you can find almost any position on any subject somewhere in the bible—literally the book for everyone—she may well have stumbled on some phrase that could be roughly construed to mean no Gay marriages.


The last possibility is that she has family and friends who are both very religious and strictly homophobic—probably racist too, since they often come as a package.  This last is the one I favor. Using religion to beat up on some group you hate is a common feature of organized religion.


So, Ms. Davis is a seriously flawed individual who should probably be doing some manual labor job that does not involve interaction with other humans. But, that is the least interesting aspect of this screwball issue. The more interesting issues are the ones about how other folks react, and how this case seems to bring out the core belief system of observers.


I note, as the best example, the reaction of Mike Huckabee. Mike, who seems to have few useful standards, says two things in applauding Ms. Davis’ actions (or inactions). One, Mike says that Ms. Davis is correct in following God’s dictates. If God tells her to do something, or not to do something, then she must follow that path.  Second, and even more interesting, Mike says that, if you (anyone) decide that a law is wrong, then that person (you) should ignore that law and follow your own standards of behavior. Now that is a really startling assertion for someone aspiring to be President of these here United States of America. Think of what he said—if you think a law is wrong, ignore it. Wow! In my book, that makes Mike Huckabee a true anarchist.


The other issue raised here is the question concerning what reactions might have been had Ms. Davis worn a Burkha, and professed belief in the Prophet Mohamid. Would Mike Huckabee  have raced to embrace her, in her burkha (arguably a no-no anyway)? Would her lawyers have raced to defend her (well they are lawyers, and anything for a buck I guess)? And would the adoring crowd of evangelists still have arrived at the jail to welcome her back? Seems doubtful. That scenario would have placed the adoring folks in a position of having to decide who they hated the most—Gays, or Muslims. What a choice.