I am beginning to wonder what has happened to us as a people. While the republican clown show goes on and on, with prospective candidates prattling on about “freedom” for God’s sake, the killings continue.  Freedom? Really? Is that the best these clowns can do? I suppose it’s a better topic than more tax cuts, their other favorite topic when they have nothing else to say.


But why hasn’t John McCain said anything to us about Mr. Bales and his killing of innocent people, including children? No, instead, McCain yaks on about “victory”. What the hell would constitute “victory” for him? Should we kill everyone in Afghanistan?? Would that satisfy Mr. McCain’s bloodlust? He needs to see a shrink so he can rid himself of the need to achieve “victory” in Vietnam.
But Newt has nothing to say on this subject? I guess Newt is too busy trying to figure out his moon base thingie. And Santorum is still too focused on denying women access to health care, and denying married couples access to that exquisite pleasure his God gave to us—sexual congress.  It makes the world go around, but Rick considers it inherently evil.  Apparently killing innocents is just part of the game. Now, I am not surprised that Mitt hasn’t commented. He is, after all, entirely focused on money, profits, money and more money. He measures everything but how much profit an operation can deliver. Since Afghanistan isn’t exactly a profit center, I guess he remains uninterested.
And, beyond the atrocity in Afghanistan, no one has said anything about Florida, where the state legislators have converted the entire state into one giant OK Corral.  I think Florida is a great case example for why we need to observe and periodically rein in the worst instincts of state legislators.  The stalking and killing of a black teenager who was found armed with Skittles and a soft drink—sounds dangerous, Huh?—now makes the state a danger ground. I would suggest that the State Department should issue a warning about anyone planning a trip to Florida for any reason. It should now be listed as an unsafe territory, sort of like Somalia. Think of it. Anyone who considers himself in fear of his life is free to shoot to kill. One the other hand, doesn’t that make Mr. Zimmerman a potential target? Everyone should be in fear for their life when in the vicinity of Mr. Zimmerman.
And no republican commentary on this outrage. I suppose, for republicans, it’s a “state’s rights” thing.  And we know how well that works out, huh?
So, one more example of why this republican primary has turned into such a doofus parade—politics for the terminally stupid.
And on that exoplanet called republiciana, I hear that the Mittster will soon visit Charlotte, and will meet with some rich friends at a local country club. Mitt gives a whole new meaning to that term, “Country Club Republicans”. . I can’t wait for Mitt to tell us that, “I know Charlotte well . . . why some of my best friends own country clubs . . .”
Posted by artful notes at 4:26 PM No comments:

As I was shopping the other day at Trader Joe's, I came across this item in its beer and wine section.  And given my view of the current republican primaries--a never-ending clown show, I thought how appropriate it would be if we could replace the current symbol of the GOP. The elephant seems quaint now. So, here is my version of the new Republican symbol: 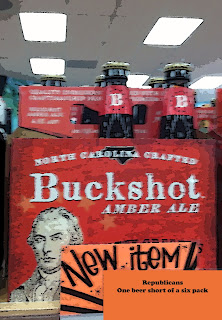 We're one beer short of a six pack.
Posted by artful notes at 7:37 PM No comments:

“God made me do it” is perhaps the perfect definition of the “last refuge of scoundrels”.  Mr. Tony Perkins, head of that Christian Taliban outlet store called the Family Research Council, announced breathlessly to his eager audience that "God has defined marriage.  It is not up to us to redefine it." And by that he denounces gay marriage and urges his faithful followers to see to it that North Carolina totally bans any and all attempts to redefine marriage to include lesbians and gays.


He brings to mind the guys who assure little boys that if they will don a vest full of dynamite and explode it in a crowded marketplace so as to kill dozens of innocents, they will be rewarded in heaven and will assuredly get their 71 virgins. Yes, God has also instructed them in the fine art of killing people because they are different.  Apparently, God is a busy fellow, and always, always on the side of scoundrels.
It makes me wonder about God. Could God really make such pronouncements? And why would God do such obviously unethical things? Do you suppose that God does no such things? And that people like Tony Perkins and the Taliban leaders who push ignorant boys into immoral acts are simply making it all up, for their own unethical purposes?
There really are alternative views of this grand universe. Even assuming that a God, or collection of Gods and Goddesses exist, and that they really did create the universe, it seems entirely likely that they provided no instruction manual to the creatures they created. So, one alternative is that God did create this whole thing a few billion years ago, just to see what would transpire. They maybe just set it in motion and are now watching it all unfold. See, that would mean that the scientific evolutionists and physicists, and biologists, and geologists, et al, are not at all at odds with God. Maybe it’s the religiously inclined preachers, et al, who are at odds with God.
See, this other view might hold that life is a wonderful opportunity that we all (that is, all God’s creatures) create through our best procreative efforts. That life is set in motion and then, at some undetermined point, that life element just stops—winks out like a light bulb burning out. And that nothing follows—no heaven, no hell, just . . . nothing. One is here, conscious, and then one is not.  Suppose that were true. What would that mean?
Well, for one thing, it would mean that all the religious leaders everywhere would no longer have any power, because they could no longer operate their grand Ponzi scheme. See, they would have nothing to promise. People would have to behave well . . . or not, sort of like they do now, but without any aftermath—no grand payoff, but also no awful punishment.  There would no longer be any point in killing someone because he is different, or holds a different view of life.  No power would accrue to people because they own God. There would be no kings by divine right. No Ayatollahs, no Popes (Nazi or otherwise), no bishops, no priests raping little boys. Just people being people--the good, the bad, the ugly.  And of course, butterflies . . .
Reminds me of that Jon Lennon song, Imagine . . . imagine there’s no heaven . . . no hell below . . . all the people living for today . . . all the people sharing all the world . . .
Imagine that . . .
Posted by artful notes at 1:35 PM No comments:

Email ThisBlogThis!Share to TwitterShare to FacebookShare to Pinterest
Labels: Imagine

It’s getting increasingly difficult to tell the crazy people from the normal people in politics lately. And that may be a sign of a tipping point in America.  Perhaps we have gone over the edge and are now beginning our gradual descent into  . . . into what? Third World status?? Are we to join Afghanistan soon as a modern 14th century society ruled by warlords (aka Arizona-style sheriffs)  and mafia chieftains (aka bankers), overseen by Christian Taliban Sharia law that is administered by Ayatollah Santorum and others of his ilk? You laugh or decry my silliness. But have you listened lately to the crazy people? Rush Limbaugh comes to mind. He is so gross that he appears not to even know that he is being gross. Happily, five of his sponsors have discussed dropping him—but that means that he had five American companies who had been willing to support him publically??? Wow, that’s an indicator of just how thoughtless American companies are these days, and how lacking in standards of decency they are. Imagine that—five American companies were willing to align themselves with that sleazebag Rush Limbaugh.


This gong show that goes by the name of the republican nominating process has become a national disgrace/comedy show—take your pick. Jon Stewart and Stephen Colbert are the only ones having fun as a result.  Has this kind of absurd parade ever happened before? What kind of a nation, not to mention a political party imagines that sick people like Newt Gingrich and Rick Santorum are plausible candidates to lead this nation? And lest we forget about Mr. Nowhere Man, the Mittster, he seems to believe in anything, or nothing—take your pick. Oh, well, we know he cares about money, and lots of it.
And how they do go on about taxes, as though taxes were some mysterious punishment that Democrats conceived to torment rich republicans . . . and don’t forget that our candidates care exclusively about rich republicans. What are taxes, anyway? As I see it, taxes are the exact public sector analog to commercial prices that we pay for goods and services. If we hire a taxi, the cabby levies a tax at the end of the ride, and we pay it. But he calls it a “fare”. If we buy an airline ticket, they charge us a specific tax, and they call it a fare.  If I go into a grocer, or attend a Farmers Market and I buy a pound of tomatoes, or a head of lettuce, do they just hand it to me and smile? Well, no, they tax me, oh excuse me, they charge me a fee/price/ cost of goods sold. Can we obtain any goods or services anywhere in America without paying a tax/fee/price??? So, when we send our kids off to school to get educated, why would we balk at paying a school tax/fee/price?? And when we call for a fireman or a policeman to help save us from something mean and nasty, do we rebel at the fact that we have paid a tax/price/fee up front??
So perhaps we should change the name and stop calling public sector fees taxes. Eliminate the word taxes and maybe republicans will be happier.  Oh, I forgot, republicans will never be happy until they manage to oust the intelligent black man from the White House.  Yes, they want instead a delusional (white) sociopath as leader of the free world, or maybe a 14th century (white) theocrat. Yeah, that’s the ticket. A crazy man in the White House.
Posted by artful notes at 3:37 PM No comments: