2013 and On Into the Wilderness of a New Year
I keep imagining that 2013 was just another year. But then I come to and realize, every year is just another year. What do we remember from the year 1913 (aside from the fact that it preceded that little incident in Sarajevo that sparked the Great War that killed ten million folks).  Or 1813, boring, aside from the war begun in 1812, or the little kerfuffle with Napoleon in Russia. Or, say, 1712 . . .when Sweden celebrated February 30th in a move to return to some old tymie calendar, and then that slave revolt thingie in New York City. Well, how’s about 1013 . . . hmmm . . . well Sweyn Forkbeard, King of Denmark, having invaded England, is proclaimed as King within the Danelaw and then on December 25, Sweyn is proclaimed King of all England in London, forcing Æthelred the Unready to flee to Normandy. So a guy named Forkbeard overcame a guy named Atheired the Unready. How great is that?
So, see, things could be worse, huh? Actually, maybe that’s a good sign. We have here Boehner the Unready, planning to take on the Kockbeards during 2014. How’s that for a return to the past? All these 12th century thinkers (aka the republican party) sitting around sucking their thumbs and planning for a return to power . . . To horse, to horse . . .
But on a more sane plain, what could I make of the year behind us and the one coming up next?
First is the thought that years don’t matter.  Years just come and go. They’re a bookkeeper’s approach to life—counting things, demarcating things . . . What matters I realize is now, this moment. Because I only exist in this moment. Yes, there are consequences to what I do each moment, and consequences live on into the future. But I control only this moment. So, I should at least try to suck the life out of each moment—they are the marrow of life.
Next is this little thing about being OLD. Yeah, I get that each day I’m just a little bit older. But I am now in my 80th year, and I can’t figure out how I got here. It means that I can no longer pretend to Middle Age, regardless of how/what I feel. So, now all of my moments are old-thing moments. Wow . . . what a concept. When I combine this OLD thing concept with the Zen of Nothingness, it makes each moment loom even larger than usual. So, I plan to pay even more attention than I normally do.
I’m thinking that 2013 wasn’t all bad. I mean, aside from the teabaggers, nationally we seem to be progressing a bit on the civilized thing. Several more states now allow the LGBT community to wed, including Utah. Utah . . . who would’ve thought? Now if only we could arrange to ban all heterosexual weddings, then the institution of marriage would be safe for all time.
And in 2014 I assume we will see peace for all time in all lands . . . well aside from the little kerfuffles (love that word)  throughout the Muslim lands, mainly, but not totally in the Middle East.  (what does that term mean? The Middle East. Why is it Middle. If I’m sitting in Oz, the Outback would more realistically be called the Middle East.  The Middle East isn’t really even the East, except maybe that it’s East of London. It’s after all, West of Tokyo, so maybe the Japanese should called Baghdad part of the Middle West). But I digress. So, I assume that all Muslims throughout the World (including that Middle East place) will now stop blowing themselves up, along with other folks in marketplaces, and Hezbollah will stop lobbing rockets into Israel, and the folks in South Sudan will quit cutting off the heads of little kids in their villages.  Remember that Zen of Nothingness? No more 71 virgins guys . . . they’re fresh out.
So, peace will finally reign supreme . . . at least until January 2nd, at which time all bets are off, and the crazy folks (them that gots religion) can resume killing their neighbors with impunity, just cuz they’re different. Only kidding . . . nope, I imagine that folks will finally regain some commonsense and cease for all time killing folks just because.
And peace will break out for all time.
And children will receive proper food, care and love for all time.
So come on people. Think a little harder. Just put away the guns and the bombs. Have another glass of wine instead. And toast to the goddess of love.
So come on 2014, we’re ready.

Posted by artful notes at 10:40 AM No comments:

Email ThisBlogThis!Share to TwitterShare to FacebookShare to Pinterest
Labels: The Newest Year

So, as we inch forward towards that merry holy day Christmas, we decided to get our trees a little earlier this year. Most times we await Beethoven's Birthday, or maybe mine, but weather and logistics prevailed this year. It was gonna rain Saturday and we needed a truck (our son-in-law's), so we ventured out last Friday. Also, our neighbors have done such a grand job that we were beginning to feel like the grinches in the hood.  So, we borrowed the truck and ventured out to the Bull Branch Tree place on Poplar Tent Road. They had a grand collection of trees, but then they always do. Gracious folks with splendid trees and wreaths for sale. Nice. Then, of course, we had to decorate. One tree for inside and one tree for outside. Still outdone by our neighbors, but at least we closed the gap . . . 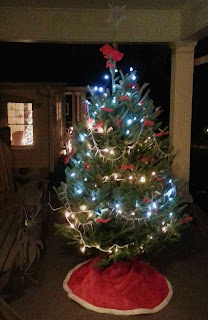 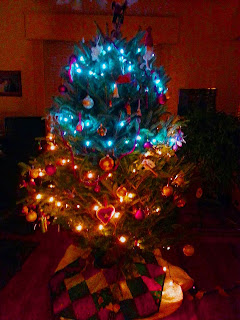 And then some outdoor curiosity 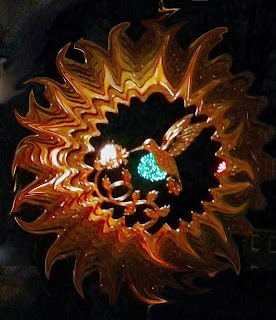 Posted by artful notes at 10:43 AM No comments:

Let’s see. Dick (his Cheyenne name is "He who shoots my friends in the face") Cheney is offended that our Prez lied to him about the Affordable Care Act.  I don’t know about you, but the claim that Dick Cheney takes offense when someone lies to him is just so . . . unbelievable. I mean, it’s similar to how I would react were the Faux News Network to take offense at the Colbert report, because it pretends to be a news show.  What is amazing is that Cheney actually surfaced from his spiderhole and engaged the public in this way. I guess I knew the man had chutzpah, but wow!
And on one of the other republican exoplanets, the state of North Carolina’s republicans, in their zeal to kill off the state’s public school system is now engaged in licensing “virtual” charter schools. Now, as best I can understand it, charter schools are already virtual public schools—that is they are fake public schools—they take public money but don’t have to meet any of the standards of public school systems.  So, what would a virtual fake public school look like? Well, turns out, it’s on-line. So, the kids can sit at home and “attend” the fake classes at their leisure, or let their parents attend the fake classes.
I’m wondering why we just don’t abandon schooling altogether (the preferred option for our republican legislators from what I can understand) and just operate a for-profit, on-line testing service. Kids can study, or not. It wouldn’t matter. If they can pass the standardized test (or get their parents to pass it for them) they get a GED (fake diploma). That way, we wouldn’t have to worry about teacher salaries, or even teacher certification. And all that dough we now put into brick and mortar? Sell it to the nearest Wal-Mart, or offload it on E-Bay.  Then our republican legislators will have more time to figure out when the state should secede from the Union.  I know, they could link up with other like-minded state legislatures and form a “more perfect union”, calling it something snappy. I know. How about the Neo-Confederate States of America. Catchy, huh?
Posted by artful notes at 3:38 PM No comments: