The Bigger the Subject . . .
Apparently the powers that be are examining the evidence now to decide how big a fine to levy on BP for that Gulf oil spill—you remember that huge eruption of oil that engulfed the gulf, while BP executives sat around with their thumbs up their collective asses, trying to decide how to dodge responsibility? It occurs to me, maybe the bigger the better. Perhaps BP will have to go out of business. Of course, what would happen then? Their resources would be sold to a bank, who in turn will sell the oil company to some other bunch of incompetents, who will resume drilling without any clear idea of what they are doing. That’s the way in this world of ours.
And then we have the bankers and other assorted financial wizards, including especially the world of economists.  I have finally been forced to conclude, with perhaps an exception or two, that economists are largely trained in sociology 101 and the fine art of statistical extrapolation.  Bankers are trained in Monopoly.
And then there is our collective politician world. What can one say? They were trained in, hmmmm, what training could possibly explain their seeming total lack of knowledge about almost any subject deemed a subject? Well, to be fair, they seem adept at discovering what is pissing off the public at fixed intervals (every two years, say).
So the trend here seems to be something like this: As a people, we tend to employ a negative correlation model for placing people in various fields of endeavor. That is, as the field becomes increasingly more important to the survival of our species, we place increasingly lower IQ folks in those fields. So, the rule might follow the chart below: 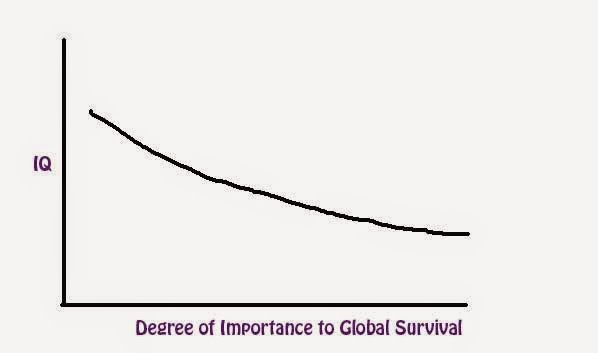 For example, we apparently permit the world of finance to gamble with the world’s supply of money, with the explicit understanding that, when (not if)  various of the global financial groups appear to be at risk of running out of the money we have given them to play with,  we will give them some more money. And this is also with the explicit understanding that their games (it’s really only one game, called Monopoly) will result periodically in crashes of the world’s financial systems, resulting in further global depressions which cause thousands, sometimes millions, of people to lose much of their savings.  That is the known outcome of the games. In between these crashes, of course, the world’s bankers, and other assorted financial managers, will make billions of currency units, which they are free to tuck away into offshore accounts in places that do not tax them.
The main question in my mind is, why . . . why do we the affected public allow such a system to exist? It would seem to me that, if we have the brain power to successfully land folks on the moon and then return them to Earth, we might be capable as a species of designing a global financial system that does not lead every few years to complete crashes.  And that we would design that more stable system to include more of the world’s population in the benefits of the risk-reward calculus.  Because that is the other peculiar characteristic of this system that the financial doofuses of the world have designed—the reward part of this system is targeted at fewer and fewer people, with the result that, now, a few hundred doofuses own more wealth than the rest of the multibillion global population.
At some point, surely, the collective will of the rest of humanity will begin to weigh in on the design of our financial system, and on the general lack of technical expertise within the various fields of energy. Maybe it is really time to halt for a time our exploration of that big space beyond our world, and to put some of that masterful brainpower to work trying to rescue the world from the collective idiots who now control many of the most important fields affecting the survival of our species on earth.
Just a thought.

Posted by artful notes at 2:36 PM No comments:

Email ThisBlogThis!Share to TwitterShare to FacebookShare to Pinterest
Labels: The Doofus Model

And a thoughtful reader has penned a response to my posting, adding another important insight into this global issue . . .
"I do think there is a larger context that makes these questions more difficult: Our world is rapidly changing from an Industrial Age to an Information Age and I see several examples that closely parallel the shift from the Agricultural Age to the Industrial Age in the late 19th and early 20th centuries. Both transitions had newly-empowered (but imperfectly empowered) groups with legitimate grievances (workers in the emerging Industrial Age;students/young people in the nascent Information Age); both witnessed large-scale violence (several regional conflicts [Crimean War, Russo-Japanese War, etc] leading to the carnage of WW I; the entire Middle East, much of Africa, Ukraine, etc, leading to God-knows-what in the near future); both saw the fall (Austrian-Hungarian Empire, Ottoman Empire, beginning of the end of the British Empire) and rise (USA, USSR) of new international powers; both included large-scale demographic shifts (farm-to-town then; international mobility now), etc., etc.,  The instability and uncertainty of such systemic upheavals, across so many different sectors of our lives, creates an environment which tears people from their traditional roots in places, family, religion, work, etc. and breeds class/group/national grievances that cannot be resolved (or mediated) by traditional roots because these roots are no longer relevant.  Chaos is a predicable result, as we are now seeing.

That leaves the two most important questions you raised:  OK, it is what it is, so what are we going to do about it?  And, who is going to lead the way?  I don't have the breadth of knowledge to addrerss these questions on a global scale, but in our country I thought Bill Clinton would be the answer (or, at least, the beginning of the answer.)  I thought he had the best combination of intelligence, vision, and political skills since FDR.  I thought he understood that if we are to take "all [persons] are created equal" seriously, then everyone must have a fair shot at success.  If education is the new coin of the realm, then in order to give everyone a fair shot quality education must be available for everyone.   If good health is (usually) an important part of a good life, everyone must have access to quality health care.  Etc., etc.  I thought he understood these things and had the skills to get things started.  Unfortunately, he couldn't keep his zipper up, and his was a wasted presidency.  Then I had high hopes for Barack Obama, but he turns out to be a terrific campaigner but a lousy political manager, and his is (in my view) another wasted opportunity.


So that leaves us exactly nowhere.  To pull back from the chaos and create conditions for a new burst of growth and improvement we need stability (real stability, not something that relies on military force or political domination bought and paid for by the highest bidder, but something based on shared norms and values and built on solid political structures,businesses, organizations, communities, and families) and a comprehensive, inclusive agenda.  The agenda, I believe, is straightforward: Everyone counts, everyone gets a fair shot, and everyone must contribute to the common good.  The problem, again in my view, is with the stability."
Posted by artful notes at 1:22 PM No comments: