I’ve been struggling lately to figure out how to say goodbye to 2015. I cannot say the year has been without interest. I mean, think Donald Trump, Carly Fiorina and Ben Carson—a guy who started life as a millionaire on daddy’s money and continues to fool folks into thinking he is anything more than a reality show clown; an earnest woman who pretended to be a high-tech executive, failed so badly that she was fired by the board (no mean feat that) and then pretends to a higher calling; and a brain surgeon who has us all thoroughly confused—I mean, how could a brain surgeon be so dumb . . . but my preferred answer is that Doc Ben pulled a one-off by operating on himself, during which he accidentally removed the left side of his own brain.  Not that the rest of the curious crowd is to be preferred. Cruz, a man whose picture makes you want to punch him . . . a man nobody seems to like, except for the pissed-off who hate everyone and everything and imagine maybe he will carpet-bomb some other folks they really don’t like. What a crew.

And then there’s the shootings and blowing people up stuff. Yeah, there’s always a terrorist group of folks who are so pissed at us, or the French, or the Brits that they are willing to shoot up a cartoon shop, or blow up a building, or shoot up a black church, or kill people waiting in a clinic, or just shoot up people, just cuz. Just cuz the NRA says that everyone should be armed, and, if you’re armed, well, eventually someone is going to start shooting.  Yeah, I now have cast the NRA as our very own American-ISIS. So don’t go thinking that terrorists are all Muslim, cuz it just ain’t so.

On the bright side, political leaders from some 150 nations finished meeting in Europe and reached a decision that they would cooperate in at least trying to minimize the future effects of human global warming. That’s significant, because at least they all seem to agree that human global warming seems to be a reality. Now to be fair, the republicans who now rule our Congress plan to repudiate the agreement, and have high hopes that in 2016 one of their own—the Donald perhaps—will act as one of his first duties to kill our agreement, thereby allowing their owners (the Kochs, et al) to continue polluting the globe. Republicans wish to continue pretending that climate change is what happens between June and January each year.   But when I got really enthused about the climate change conference and the resulting agreements, I came across and read an article in the Guardian by James Lovelock, no merry prankster he. Lovelock has been forecasting ecological disaster for a long time now. In the article, he is quoted as saying,

“Lovelock believes global warming is now irreversible, and that nothing can prevent large parts of the planet becoming too hot to inhabit, or sinking underwater, resulting in mass migration, famine and epidemics. Britain is going to become a lifeboat for refugees from mainland Europe, so instead of wasting our time on wind turbines we need to start planning how to survive. To Lovelock, the logic is clear. The sustainability brigade are insane to think we can save ourselves by going back to nature; our only chance of survival will come not from less technology, but more.
Interviewers often remark upon the discrepancy between Lovelock's predictions of doom, and his good humour. "Well I'm cheerful!" he says, smiling. "I'm an optimist. It's going to happen."
Humanity is in a period exactly like 1938-9, he explains, when "we all knew something terrible was going to happen, but didn't know what to do about it". But once the second world war was under way, "everyone got excited, they loved the things they could do, it was one long holiday ... so when I think of the impending crisis now, I think in those terms. A sense of purpose - that's what people want."
"There have been seven disasters since humans came on the earth, very similar to the one that's just about to happen. I think these events keep separating the wheat from the chaff. And eventually we'll have a human on the planet that really does understand it and can live with it properly. That's the source of my optimism."
What would Lovelock do now, I ask, if he were me? He smiles and says: "Enjoy life while you can. Because if you're lucky it's going to be 20 years before it hits the fan."

Wow, what a fun time to contemplate. We can, of course, join the republicans and play “Let’s make believe”, or we could at least try to act beginning now to plan for the coming climate changes.  First things first of course . . . 2016 is the Year of The Vote. So, everyone might consider how best to support your very own candidate, preferably someone with more than half a brain (Carson fans kindly take note). If you want politicos to pay attention and do serious stuff to ward off the worst that our planet now has in store for us, then kindly vote for those not on the payroll of the Kochs and others of their ilk.

And finally as the day’s curtain is about to fall, imagine yourself as Bogie, walking off into the night . . .  and announcing to the world at large,

World, I think this is the beginning of a beautiful friendship . . . 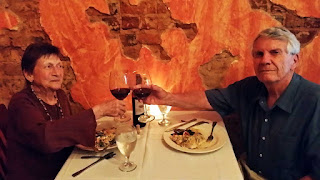 Posted by artful notes at 5:41 PM No comments:

Email ThisBlogThis!Share to TwitterShare to FacebookShare to Pinterest
Labels: 2015

An Open Letter of Apology
To Our Friends Around the World

I am sitting at my desk, reading one awful tale after another describing the Decline and Fall of the American Empire. Tony Scalia, one of our lesser Supreme Court Justices, in open court, declares that our African-American population is largely too stupid to attend the more rigorous colleges and universities and should be content with attending schools of less demanding programs.  Donald Trump, the leading Republican candidate for the presidency, declares that we should ban anyone and everyone of the Muslim religious belief from entering our country. Ted Cruz, Mike Huckabee, and Tony Jindal--three lesser Republican lights— share a platform with a pastor who believes we should kill Gays. Carly Fiorina, who appears not to understand the difference between truth and lies, openly supports a viciously negative and entirely false video about Planned Parenthood, and then becomes upset when people think she should share the blame for the terrorist killer who shot up one of their clinics and killed three people.

And it goes on and on, with each republican rant worse than the last.

Many believe that the official ISIS strategy includes the carrying out of outrageous acts of terrorism with the explicit aim of outraging their opposition such that their opponents will carry out equally stupid and outrageous acts. They wish to both provoke a war between Islam and the West and to use their outrageous program to attract more young people willing to commit suicide for the imbecilic cause of the pseudo-Caliphate of ISIS.  And, because they seem to be succeeding, our Republican Party seems to have adopted this strategy for their presidential campaign.

Meanwhile, back at the ranch, everyone is yelling that the regular Muslim people, and even the normal Muslim preacher/mullahs should openly decry the outrages being committed routinely by ISIS/Daesh, Qaeda, and the Taliban.  And yes, it would be nice if the Mullahs et al would begin publically preaching against these crazed creatures who almost daily despoil the name of Islam—and many do preach against these idiots.

But, hold on here, folks.  We can observe daily killings by both “normal” and crazy Christian Americans in our own nation.  I believe the number of folks killed by guns within our fair country exceeds 30,000 per year.  Yet, while the stupid people think it’s just fine and dandy for the Trump to propose banning all Muslims from entering our country, it is apparently not ok to propose new forms of gun control. We have greater controls over folks driving cars, buying drugs, and gaining access to certain forms of medical care than we have on gun sales.

So, I am here to apologize to the people of the world, especially to our friends in Australia, Britain, Canada, Germany and India for our failure as a formerly great nation to adopt civilized standards of international behavior.  We used to be better than this, although we have a chequered past (think Japanese internment camps, think slavery). We attacked Fascist states who were attempting to impose their savage will on the civilized world, and we succeeded in beating back their attack.

But we have grown complacent and sloppy in our approach to the world. Despite being the most heavily armed nation on the globe, we are acting like a bunch of terrified stupid children.  Apparently that old thing about:

“Give us your tired, your poor, your huddled masses yearning to breathe free, The wretched refuse of your teeming shore. Send these, the homeless, tempest-tost to me, I lift my lamp beside the golden door!”

has now vanished from our consciousness.  Now we only want white, Christian bankers and tekkies to join us.  The fact that the republican clown show, headed by the chief clown, The Trump, can openly espouse lies and outrageous demands, and we sit quietly while pastors preach violence is a sign that we are headed downhill and rapidly. We risk becoming a mighty pariah state.

So, I apologize for what we seem to be. But really, we are not all imbecilic fascists, even if the Faux News Network makes us seem that way (thank you Rupert Murdoch). I am hoping that any responsible, intelligent republicans still alive will begin to do what we have been advocating for responsible Muslims—speak out folks. I imagine Lincoln, Eisenhower, et al, spinning madly in their graves. It is up to you, the living republicans, to tell us once again that Trump, Cruz, Fiorina, et al, do not represent what your party stands for. Nor do they represent what America stands for. I thought we were better than this.

Perhaps I am wrong.
Posted by artful notes at 4:38 PM No comments: