Apparently our senior-most politicos simply are incapable of learning . . . or perhaps they just love a good war, especially if they are not the ones being shot at or bombed. Our senior Vietnam Warmonger, John McCain, accompanied by his very own Tonto, Lindsay Graham, are insisting that we go to war in Syria.  Why, oh, just cuz . . . well, actually cuz Asaad turned his very own chemical industry on his own people—well technically I guess they are no longer HIS people. They're sort of anti-his people.


And we have everyone running about yelling about bright red  lines having been crossed. Oh, and the Brits and the French, not to mention the Israelis and the Turks are all running about without their heads yelling “War, War, we want War!!”
The Russkies, of course, are adamantly opposed to war, and they are ungracious enough to remind us about Iraq, and even comparing Obama to The Shrub. Way to go Vlad. . . you really know how to hurt a guy.
But I keep wondering. What is there about that part of the UN Charter  concerning non-interference with the internal affairs of its member states, that we all don’t understand?  In what way, I wonder, would bombing/invading, or otherwise warring against Syria be in any way different from the Shrub’s patently illegal invasion of Iraq? Yes, Asaad used chemical weapons. So, what? He’s using bullets, bombs, tear gas, probably flame throwers—in short he’s emptying his arsenal at his people in an attempt to remain relevant.  His pathetic attempts may not, probably will not work, but it seems to me that’s for his people to work out. I continue not to understand why it’s ok to shoot your people, or run over them with tanks, or bomb them from the air, but it’s not ok to gas them.  Maybe we don’t get this thing of DEATH. When folks become DEAD, it really no longer matters how they became DEAD. They no longer exist (no, they don’t enter heaven, or hell. They just no longer exist). So, why do we care how they came to be DEAD? Yes, Asaad is a 12th century thug, but so are many of his enemies.  Is Putin really much better than Asaad? No??? Yet, I don’t see us playing war games with him.
So, we really need to consider sanctions, perhaps, but not bullets, or drones, or other war toys. If we cannot get the UN to enter as a global force (enter Mr. Putin) then maybe we shouldn’t play George Bush, once again.
Perhaps we need to put Mr. McCain back in a jet fighter, with Mr. Graham as his copilot, and let them play their Vietnam Redux game, but all by themselves. There will be no real winners in Syria. But let us not be one of the losers there.
Posted by artful notes at 2:52 PM No comments:

Another milestone in our passage towards oblivion. A good friend, May Boothby, passed away, while watching TV in her own home. May stoutly resisted the idea of moving in with her kids, despite the many attempts by them to get her to move in or closer to them. May remained stubbornly independent and died presumably as she would have wished.
We met May and her family when we lived in New Delhi and May lived in Jaipur. May’s husband was with the UN Food and Agricultural Organization. They lived in Jaipur so Guy could work with Indian farmers who were raising sheep.  Guy and May had three kids at the time we met and they added a fourth midway through their term in India. Their two sons were close in age to our two daughters and the kids played together regularly whenever we got together. One of our fond memories was a weekend we spent in Jaipur with Guy and May. It was one of the boys’ birthdays and May had arranged for the kids to take a ride around Jaipur on an elephant. We were all in the house, when the boys came racing into the house yelling, “Mommie, Mommie, there’s a strange elephant in the driveway” Not just an elephant, mind you, but a strange elephant. 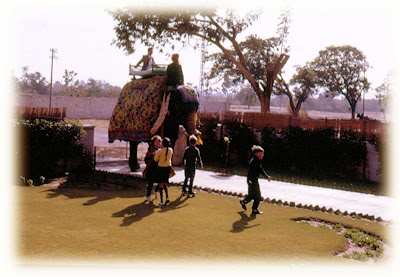 While living in Jaipur, The Boothby’s had become good friends with the Princess of Jaipur and friends with her parents, the Maharajah and Maharani of Jaipur. Through them, we were invited to many fabulous affairs in Jaipur. We attended a formal ball at the Maharajah’s city palace—an amazing affair for two little kids from New York.  We were greeted at the palace gates—silver doors actually, by a well dressed man, and then farther on by a well-dressed elephant. 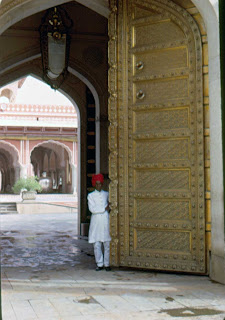 Later, May invited us to spend some time with the princess (we knew her as "Mickie") at the Maharajah’s summer hunting lodge near Jaipur.  We dined, the kids cavorted next to a tiger brought down by the Maharajah, and a good time was had by all. 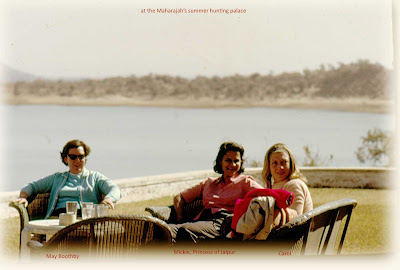 May and Guy traveled extensively beyond India. They lived in Africa, and in South America before returning to Australia.
Happily, we got to visit May in Australia, when we journeyed there to attend the wedding of a Sri Lankan lad with whom we had become close in the US.
May had a full life. It did not deliver all she wanted or deserved. She and Guy divorced after their return to Oz. May deserved more.
But she had the full support and love of her kids until she finally left this life and passed into the Night for Which There is no Morning.
Posted by artful notes at 4:18 PM No comments:

Email ThisBlogThis!Share to TwitterShare to FacebookShare to Pinterest
Labels: Another Friend Gone

I found the article in the Guardian about Schrodinger's cat theorem wonderful. It also promoted many amusing comments.
Erwin Schrödinger birthday celebrated in Google doodle 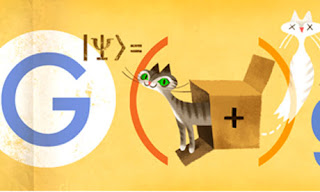 By 1925, then a professor of physics at the University of Zurich and holidaying in the Alps, Schrödinger formulated a wave-equation that accurately gave the energy levels of atoms. It formed the basis of the work that would earn him the Nobel prize in physics in 1933.

In subsequent years, he repeatedly criticised conventional interpretations of quantum mechanics by using the paradox of what would become known as Schrödinger's cat. This thought experiment was designed to illustrate what he saw as the problems surrounding application of the conventional, so-called "Copenhagen interpretation" of quantum mechanics to everyday objects
Posted by artful notes at 11:11 AM No comments:

Big article today about our home town bank, the Bank of America. Seems the bank has been committing fraud, selling investment instruments that were largely worthless. The details escape me, mainly because I no longer care, so I have trouble reading these articles about fraudulent banks all the way through.
I concluded some time ago that global banks should be considered part of the world’s largest organized crime ring. They make the Mafia look like little kid hucksters.  So, when a bank is taken to court by the SEC or anyone man enough to confront them, it gladdens my heart. I wonder how many people are now trying to figure out how to survive their retirement, now that the Bank has made their retirement investments worthless?
So, what should we do about such things?
Well, I for one like to consider going back to something Judge Tony (aka Scalia) made possible. Tony asserted, and got his right wing buddies to approve, the premise that corporations are persons. So, why is that important? Well, it occurs to me that, if the Bank of America, was defrauding other folks (including other corporate folks), then the Bank of America itself  should be held accountable, as part of a conspiracy.  So, not only can the Bank officers be brought to judgment, but the Bank itself can also be brought to judgment. And what do I mean by “brought to judgment”? Well, let’s suppose the charges against the Bank and its officers holds up in court and that the Bank is found guilty of fraud—a felony I believe. So, what’s such a felony worth in prison time? Well, let’s say 5-10 years in a federal penitentiary.
I am thinking that, since Corporations are now persons, that the corporation and its officers should be sentenced to actual prison time.  So, let’s say the Bank of America gets a 5-10 year sentence in some federal prison (I so wish that Alcatraz were still open). That means that a cell would be reserved for the Bank—mainly I guess its formal charter or its certificate as a corporation, placed carefully in a nice box and placed carefully on the bed. And, the Bank as a person could of course no longer operate as a corporation, so the bank would essentially close for 5-10 years. Now we would have to make some provision for ordinary folks to remove their money and assets from the bank prior to executing the sentence.  Then the Bank (its papers of incorporation) would be placed in that box and locked away for 5-10 years.  After the Bank had demonstrated that it could behave, maybe it would be granted probation and allowed to resume banking, assuming of course anyone still cared.
Now that would be an adequate payment for wrongdoing. Perhaps it might even make other global bankers a bit more cautious about their current plans to screw the public once again. AP Giannini would be so proud.
Just a thought.
Posted by artful notes at 3:55 PM No comments: