A recent article by Leonard Pitts of the Miami Herald spoke to the existence of home-grown terrorism. He had been writing about how we need to stand together with Bostonians.

“We stand together,” he had written. “We stand defiant. And we stand with Boston.”
A letter-writer to Mr. Pitts disagreed.
“Your wrong pal we do not STAND TOGETHER.OH MY GOD we need a CIVIL WAR. The American people against the LIBERAL DEMACRAT SCUM that we have let allow SCUMBAGS like those that would BLOW UP people in BROAD DAYLIGHT to be here … WE NEED A CIVIL WAR. Those demacrats that happen to still be breathing after that CIVIL WAR will have a choice. BECOME NORMAL or you are LEAVING with the 11 million illegals that ARE GOING HOME … THIS IS SO CLOSE TO HAPPENING THAT EVERY LIBERAL IN THIS COUNTRY SHOULD START LOSING SLEEP … THERE IS A CLEAR REASON WHY WE ARE ARMED TO THE TEETH ...”
This letter is indicative of the existence of an increasingly radicalized group of US citizens, who are likely armed and dangerous. They need to be on an FBI terrorist watch list. But are they??
Mr. Pitts’ article today was, frankly, both scary and "suspicions confirmed". I have long believed, reading and listening to the hyper-partisan rhetoric flowing from the right wing, that we were in the beginning stages of a civil war. When I read about all the efforts now going into determining where/how the brothers who bombed Boston received their radicalization and training, I am drawn now to wondering where/when Mr. Pitts’ letter writer received his radicalization and training. We seem always driven to looking for clues when the terrorist is a Muslim. Do we imagine that the letter writer is a Muslim? Hmmm . . . probably not. But he has been radicalized, and now represents a potential terrorist threat to the United States, and should be on an FBI terrorist watch list. Now, he may simply be crazy and in need of medical treatment and probably hospitalization. But perhaps the same could be said of all terrorists. Don't you have to be crazy to do these things??


What troubles me is that I don't see any equivalent effort being expended by the police and FBI to look for the crazies represented by Mr. Pitts’ letter-writer. I am being drawn inexorably into a state of depression about our nation's future. I have grandchildren and even great grandchildren. I fear for their future. It once seemed bright, but the future now seems dim and potentially catastrophic. And the threat isn't even foreign. It's all home-grown, with the right wing megaphones--read the Faux News Network, Sarah Palin, Ric Santorum, Hannity, et al, urging them on. And they feel no shame.
Posted by artful notes at 9:01 AM No comments:

Weapons of Mass Destruction
So the Boston bomber is being charged with using a “weapon of mass destruction” to carry out an attack with the intent of murdering many people. I gather that the weapons of mass destruction charge carries a stiffer penalty than just any old weapon.  So, with that WMD, the bomber(s) managed to kill 3 people and maim near a couple of hundred folks who happened to be watching the marathon at its ending stage.  He may also be termed a “terrorist”. So, he will be a terrorist who employed a WMD to carry out an act of terror within the United States.  The good republican folk, always trying to be helpful, are also trying to have him declared an “enemy combatant”, the better to keep him incarcerated like those evil guys down in Gitmo, As an enemy combatant, I guess we can keep him in a cell for a really long time without all that inconvenience about his rights to a lawyer. The fact that he’s actually a US citizen seems less important to the republican folk than the fact that he hails from Chechnya and used a WMD.
So all this republican logic train started me thinking. This guy, the mad bomber terrorist dude actually succeeded in killing three people.  Meanwhile, the dude who used his automatic guns equipped with large capacity magazines in Newton, CT managed to off over twenty little kids in an elementary school.  And that dude who used his automatic rifles in that theatre in Aurora also killed  more innocents than our Chechnyan-Bostonian  terrorist. So what then makes a WMD? It seems to me logical that any weapon capable of causing the deaths of large numbers of people in a short period of time could logically be classified as a WMD. Certainly an IED with a large enough dynamite capacity would qualify, but so might an AR-15 rifle equipped with a high capacity magazine.  Nicht Wahr??
So, if we can all agree that our Chechnyan-Bostonian terrorist can be charged as a terrorist using a WMD, then why not the dudes who shot up Aurora and Newtown?  They were, after all, way more effective at killing a large number of people in a very short time period than our terrorist in Boston, n’est-ce pas??
If so, then it follows that any automatic or semi-automatic gun, equipped with a large capacity magazine, is by definition a WMD. And one might imagine that, say, background checks might be useful before granting permission to buy a WMD.  So, now perhaps we can move logically to some slightly more serious control over such weapons. Surely, even republicans currently in the loving arms of the NRA money-bags would agree to such a proposition.
It also makes me wonder, just hypothetically of course, whether under-regulation of dangerous industries, might also be the equivalent to a WMD. That explosion in West Texas seems to have been caused by really crappy management oversight of the plant and little to no federal or state regulation/oversight.  Makes me wonder . . .
And in other news, it is reported that on exoplanet Dickhead, the Cock brothers now wish to emulate their mentor Sir Rupert of Murdoch by buying their very own newspaper. They are simply trying, they claim, to provide an outlet for conservative viewpoints, otherwise missing in these here United States.  I suppose technically they have a point since all of Rupert’s outlets, The Faux News Network, the False Street Journal and others no longer qualify as actual news outlets.
Posted by artful notes at 4:33 PM No comments:

Email ThisBlogThis!Share to TwitterShare to FacebookShare to Pinterest
Labels: WMDs


So, three guys walk into a bar, a Muslim, a Christian, and a Jew. They order beers. Just as the barman begins to pour the beers, the Muslim guy detonates his dynamite vest. But before the dust has settled on the interior wreckage, a missile from a nearby hovering drone, strikes the bar, demolishing the place and killing everyone within.
Global interfaith accord in the 21st century . . .
Posted by artful notes at 4:37 PM No comments:

Email ThisBlogThis!Share to TwitterShare to FacebookShare to Pinterest
Labels: Interfaith

It’s getting harder and harder to admit to folks that you live in North Carolina, such a national joke have we become.  I’m awaiting the date and time when Mississippians first begin uttering those fateful words—“Thank God for North Carolina.” Yep, the race to the bottom has begun in earnest.  There must be something in the water in Raleigh. Maybe it’s the Kool-Aid they’ve been drinking.
But really, a state religion? And maybe even, with the joke legislation they tried to foist off on the state, a county, or even a townie religion. And which one would that be??? How about Wiccan? Yeah, that would be cool.  The Cabarrus County Wiccan Church, and we could begin all official meetings with a Wiccan prayer:
“Ladies and genemums, we wish to give thanks to all the wicked witches of both East and West, for bringing us all those good blessings in our lives . . . especially hot is those drone-brooms that we are able to use to clean house in our Charter School system—ya know, the one we use to replace all those go’ment schools.  So, thanks to all you Wiccan goddesses out there. You done good.”
And then, we could fly the Wiccan flag above all official buildings in the county. 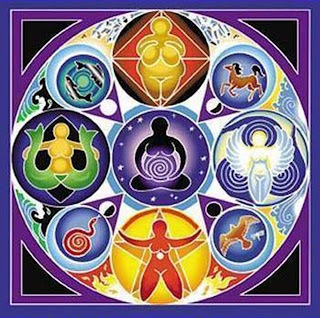 Yeah, we really are on to something. Some might call it stupidity, but that’s just all those jealous folks who live in Mississippi and South Carolina.  See, they thought they had a lock on the National Stupidity thing. They didn’t reckon on North Carolina republicans. Way to go republicans!!
Posted by artful notes at 2:05 PM No comments:

April 1, 2013
Mr. Reince Priebus, CEO of what used to be known as the Republican Party told reporters today that, since the demise of that Grand Old Party, he has been hitting the Help Wanted pages of the Wall Street Journal hard. And he now wishes to announce that he has found a new position—starting today, he will take over the helm of a newly formed political party, henceforth named the Crunchy Granola Party.  Crunchy will work hard to reinvigorate debate about America’s values. Reince will be joined in this grand undertaking by Glenn Beck and Sarah Palin.  Reporters expressed some skepticism about this venture, especially with the addition of Mr. Beck and Ms. Palin. But Reince sought to quiet their fears.
He announced that Mr. Beck has resolved his anger issues, ever since he began growing and consuming high quality marijuana about six months ago.  “His brownies are to die for”, said Mr. Priebus.  “And as for Ms. Palin”, he said, “She has put up all her guns for adoption by good families, and has formed a petting zoo in her home town, Wasilla.” She had decided to retire, but apparently couldn’t resist joining this new initiative.
The Crunchy Granola Party has embarked on a redefinition of the values that made America great. Their platform includes:
1.       Complete support of Gay Marriage. “Gays and Lesbians are the only creative beings on this planet and we desperately need some creativity in this country”, said Mr. Priebus.


2.       Legalization of marijuana, LSD, and a host of other mind-altering drugs. “We expect Phillip Morris to jump all over this baby,” he said.


3.       Support for a new science venture—“We intend to build a Motel 6 on Mars within ten years,” he announced, with great pride.


5.       “And finally,” he said, “we intend to solve this Middle East crap once and for all. We intend to sell Florida and Mississippi to the highest bidders from among a highly select group, i.e., Israel and Palestine. They can each flip a coin to see who gets which spot. Neither place is being used for anything productive anyway”, he said.
Mr. Priebus took no questions after his grand announcement.  He referred all questions to his new PR spokesman, Mr. Herman Cain.  Thaaaaat’s all folks . . .


And on that other exoplanet, Justice Scaliathomas announced that (t)he(y) would be recusing himself from this latest flap about Gay marriage. “We decided that the whole thing is just too stupid to waste any more time on. We’re headed to Disneyland . . .”
Posted by artful notes at 12:47 PM No comments: