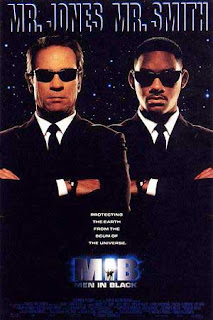 The Secret Service thing has me baffled. How could the Men in Black gang let themselves go that way? I mean, they are supposed to be one step short of robots—sort of Commander Data with dark glasses. What are they doing cavorting with actual women? Did Data ever try hitting on Uhura, or Deanna Troi?? No! He was regarded as a sex symbol, but remained carefully aloof from women throughout his tenure.  So, what goes on here?
And then, for heaven’s sake, the General Services Administration (aka GSA) holds a “conference” in Las Vegas, that includes hyper-expensive shrimp—that GSA??? I think not. I mean, during my brief tenure as a government employee (I left during the Reagan Administration because I thought I might go brain-dead from having to interact with his appointees) we all regarded GSA as the janitors of government. They were the go-to guys if you wanted to rent a building somewhere in downtown El Paso, or have a building steam-cleaned before some VIP visit. They were boring, but very careful, especially with money. GSA in Vegas is like imagining Newt Gingrich as President Moonbeam—fun to consider, but really—ain’t gonna happen.
So, what to make of this twin disaster for government imagery?
Well, my thought on these disasters is the Koch’s. You know how in Men in Black, they promise to rid the universe of scumbags?? Well, I give you the prima scumbags in America—the Koch’s. I mean, they obviously know they’re scumbags. So, I think that the Koch-heads decided to attempt a regime change in our very own Men in Black gang—the Secret Service. They felt threatened, so they bought themselves a dozen or so guys, dressed them in appropriate MIB attire, and sent them on ahead of the real crew. They made believe they were real Men in Black guys, when instead they were just paid actors—you know, sort of like the talking heads at the Faux News Network who are actually just actors pretending to be delusional psychopaths.
So, that’s my take on these twin scandals.
Just thought you’d like to know.
Posted by artful notes at 5:27 PM No comments:

Email ThisBlogThis!Share to TwitterShare to FacebookShare to Pinterest
Labels: Men in Black

Darth Vader is afoot in the country again. He was sighted this morning on TV, looking all of his 125 years, speaking to pseudojournalists about how the Obama adnministration has been an "unmitigated disaster." Listening to him was akin to listening to the Captain of the Titanic speak about the finer points of navigation. For a while, I had high hopes that, having received an actual heart, he might have become kind enough to go back into his spiderhole without speaking publically.  He's such a loathsome creature that he really needs to return to whatever dank hole he occupies in between his Faux News appearances. At least President Stupidhead (aka Shrub) has been good enough to keep his mouth shut.

I noted this morning that the US Chamber of Commerce approved whatever agreement was reached by Obama with the several South American leaders at the recent summit. That's of course a really bad sign for us normal people. The Chamber is so far to the right that anything they like has to be a really bad deal for the middle class--the group that Republicans seem to be attempting to eliminate.

And on other odd news, I note that Mr. Anders Breivik has pleaded not guilty by way of self defense(the Florida Zimmerman plea). Apparently, having killed over 70 people, Mr. Breivik claims he was acting to defend the honor of white Norway. Maybe if he gets acquitted there, he can become the official spokesman here for the NRA. He's their kind of guy.
Posted by artful notes at 9:51 AM No comments:

The sky is falling . . . the sky is falling . . .oh, sorry. We just lost one of the clowns, but, on the bright side, we still have three left. So, it is my understanding that Newt will leave next. He is $4.5 million in debt, and will soon have to cease shopping at Tiffany's for Mrs. Plasticwoman.  So, instead of running for President of the US, the Newtster has decided to run for Pope, as soon as the Nazi Pope gives up his day job.  He has, we understand, promised his current wife that, if he ascends to the throne, he will give her permission to redo the Vatican, especially that  creaky old ceiling in the Sistine Chapel--it is so over.
And, should the Newtster become his Holiness, we understand that he has promised the Rickster to reconvene the Court of the Inquisition and that Rick will be given a seat on that Court.  Nice, huh?
And that leaves only Dr. Paul, who may soon have to resume practicing actual medicine, instead of the black magic he has been practicing for the past year, or so. It's kind of nice thinking of him as a Medicine Man . . .
Posted by artful notes at 1:06 PM No comments:

Email ThisBlogThis!Share to TwitterShare to FacebookShare to Pinterest
Labels: Santorum is over

Our grandson Ethan, an 8th grader at the Winkler Middle School here in Concord, NC, was asked, along with all of his classmates, to write a small paper on Patriotism. Writing the paper in class, the students had no opportunity to do any research. They wrote what was in their minds.  We are still awaiting a read of his actual paper--his teacher has not yet returned the paper. But all the papers were submitted to a review group and his was one of four selected as the best in the entire 8th grade at Winkler.  Among other things, he wrote that Patriotism is more than wearing a lapel pin, or pasting a little sign or banner on your car. Patriotism is revealed by how you live your life--by your actions as a citizen. Not bad for an 8th grader I think. Our elected representatives might pay attention.
As a result of his paper, and as part of an 8th grade field trip to Washingtopn, DC, Ethan was selected, along with three of his classmates, to lay a wreath at the Tomb of the Unknown Soldier. The family thought that was a great honor, and not something to be missed.
So, we accompanied Ethan's folks and his sister on a trip to Washington, one of our favorite places anyway. While there, we all watched the ceremony at the Tomb in the Arlington Cemetery.  What follows is a pictorial of that ceremony. needless to say, we were all moved deeply and we are all very proud of our grandson. 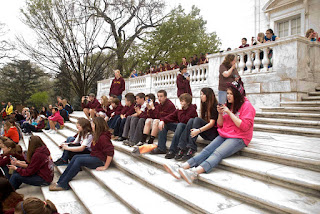 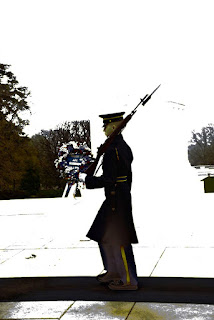 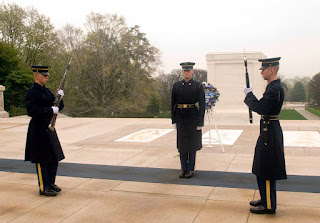 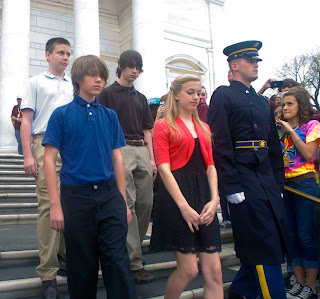 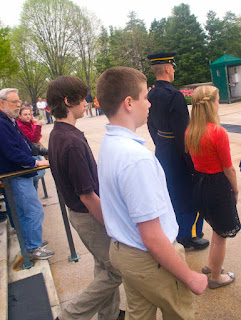 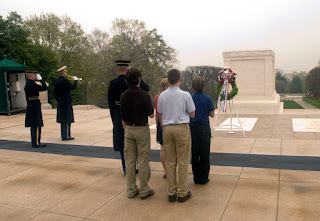 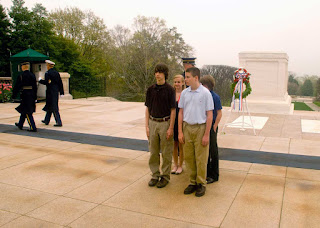 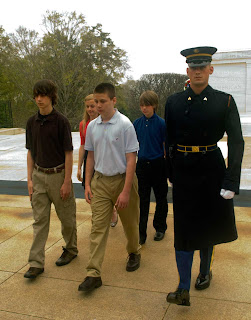 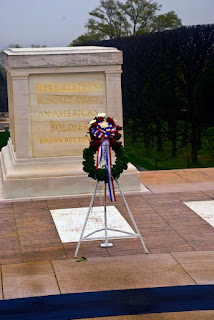 Posted by artful notes at 12:47 PM No comments:

Email ThisBlogThis!Share to TwitterShare to FacebookShare to Pinterest
Labels: Patriotism

The Civil War: It's Over

As I was driving along in Concord the other day, I noticed a sign on the back window of the car in front of me. The sign read “Yankees Suck.” My first thought was, “So you really don’t like the NY Yankees, but “suck”? No one could realistically describe them that way. Then I thought, “Ahh, no, the driver isn‘t talking about the NY Yankee baseball team. She’s talking about me.”  Ah, yeah, one more southern slash attack on us “damned Yankees.”


And then I thought back to that letter to the Editor in the Charlotte Observer a while back, where the writer expressed concern about the “transplants” to this area and their negative effect on the water supply—yet another “damned Yankee” expression.

Since I am pretty clearly a “Yankee” I surely must count myself among the horde of “transplants.” I am from . . . hmmm. Well, I come from Brooklyn, and from Los Angeles, and from San Francisco, and from New Delhi, India, and from Boston, and from Washington, DC. So I guess I am sort of a career expatriate. I figure though, that the only difference between me and the local “indigenous” population of North Carolina—you know, the true “Southerner”-- is when I “transplanted” myself from somewhere else to here. The “local” population, after all, came originally from the same places my grandparents originated. My grandparents emigrated from Scotland, where many North Carolinians originated. They came here, as many others, relatively poor, uneducated, and looking for a new life. The main difference is that they stopped in Brooklyn, rather than migrating down the Appalachian chain to settle in North Carolina.

The current local residents come from diverse backgrounds. Some come from people who were
rich, or lucky, buying or stealing land from the true indigenous population—the Native Americans. Some were unlucky, arriving here in chains from far away places.

I have always believed that one of the great strengths of the American people is our migratory habits. We are a people on the move. That’s how we settled the country. This migratory habit caused great cultural integration in our people everywhere, making for a better population that derived strength from the cultural mix. Dwight Eisenhower, when he was president, encouraged this migratory pattern by authorizing the great Interstate Highway system that allowed people to travel all over the country on good roads.

Now, through all of our various moves, until now, we never encountered walls of resistance, or local people signaling “Yankee Go Home.” Even when we traveled to live for a time in India, we were considered honored guests and treated well. Since coming to live in North Carolina, we instead see letters in the paper about transplants despoiling the land.

While talking recently with the dad of a young boy who had just finished playing basketball with my grandson, I mentioned the warmth here and the snow up in New England. He remarked, “well don’t tell THEM what we have here. We don’t want any more of THEM coming down here.” The fact that I was one of THEM apparently didn’t enter his brain before he uttered those words to me. I see the Confederate flags on cars and flying over houses. I wonder about the message. I think those flags and the messages are borne out of the continued presence in this area of The CIVIL WAR.
So, I have come up with a great idea for a new article, maybe in the newspaper, or perhaps even a series of articles. It would have to have a catchy title. Perhaps something like:

The Civil War is Over: No Really, it’s Over.
Look it up in Wikipedia. Or Google it.

So, the article would be all about how the War is really finished, and how now would be a good time to get on with our collective lives. And how this would be an even nicer place to live if we didn’t keep reverting to tribalism. So that’s about it. A new article. Think about it. Couldn’t hurt.
Posted by artful notes at 1:38 PM 1 comment: