As this pandemic continues to consume us, I look back on the past year, and begin thinking about things I have missed.  One of those things is Art.  I took up photography, partly as a hobby and partly as an art form, although many would debate whether mine is an art form.   Just before leaving for India, on a trip that would finally consume four years, I was advised by my brother-in-law to buy a good camera, and then, after my arrival in India, to photograph everything. Initially, he said, everything would seem exotic, and so you must transform that exotica into 35 mm imagery.  He was not thinking about Art, more perhaps about recording a life experience.  And he was right, of course.  I was a poor kid from Brooklyn, who had hardly traveled at all, and certainly not to an exotic location like India. Everything was startlingly different. And so, I took him at his word and began transforming my life in India into the art form called photography.

Now, as I think back on it, photography was not everyone’s definition of “Art”.  I was not, of course, Ansel Adams. No, I was just an itinerant photographer from Brooklyn. Still, many people differentiate “Art” from “photography”.  Partly, I think it relates to the technical process whereby a final product is finally produced. In “Art”, a visual art that is, one begins with a blank canvas, and then takes up either water colors or oils, and paint brushes, and then one begins to fill the blank canvas with some imagery concocted from within the brain.  In photography, you point a camera at someone or something, and press a button. Then an image appears within the camera, an image which you ask someone to print, and then voila, you have “Art”.  Well, many would say, no, that is photography, not “Art”.  And therein lies my dilemma.

After I returned from India, having taken perhaps 2-3,000 photographic images on slides or negatives transferred to paper, I began fooling around more than I had in India. I acquired a darkroom and began transferring my images to a final paper product by myself. I also acquired an ability to print on larger pieces of paper.

Then, at some stage, my photography transferred from 35 mm into that form known as “Digital”. Yeah, I bought a digital camera, thereby eliminating that darkroom in favor of a computer. I had already bought a desktop computer—we were now in the 1980s—and some software to go along with it. So, I began fooling around.  I still, at that stage, did not think of myself as a “Digital Artist”, or what I was producing as “Art”.

Then time moves on. I gradually expanded my repertoire of digital production equipment, to include different and larger printers. And the technology changed over time, so that I could now print on rolls of paper, or even, rolls of “Canvas”. Yeah, that’s “Canvas”, as in the same kind of thing oil painters use to render their mental images into a final painted product on canvas.

And then, to confuse everything further, the village in which we now live, began sponsoring periodically, things called “Art Walks”.  Now what you might ask, is an “Art Walk”?  Well, it is an artsy event in our downtown, in which a number of commercial establishments on the main street allow artists to display their art work, generally indoors to avoid any weather, and people from the village wander with their families from one shoppe to another looking at and sometimes buying some of the art, after which they all go to dine at one of the local eateries.  And the shoppes range from actual art galleries to other commercial shoppes selling various products, and maybe even the dining establishments towards which the folks would eventually gather.  Each “Art Walk” would last for several hours, and it would provide an opportunity to both show off whatever you had produced, and to chat with the folks wandering by.  And what was the “Art” at these events? Well, there was the usual collection of oil painters, or water colorists, plus ceramicists, jewelers, woodworkers, even musicians.  The events were pleasant, sometimes even profitable for the “Artists”.

Now there was always a sort of competition between the oil/water colorists and the digital “Artists”.  See, one of the things I had acquired over the years was this thing called artistic digital software, Photoshop to be specific.  And with my software, I could produce final images, and then print them on canvas, which looked for all he world like they were oil paintings. That is, the game was no longer to produce digital art that was clearly photographs, but rather to muddy the waters enough so that folks could not easily tell the difference.  Now, my intent was not to confuse the buying public, but rather to produce artistic creations that pleased me, and hopefully the public.  That is, I would fool with an image on the computer until I had an image that I thought was pleasing, and then I would go ahead and print it on canvas.  Then I would frame it and voila, a whole new form of artistic imagery.

And one of the nicer features of these “Art Walks” was just conversing with the public wandering by.  Inevitably, if someone was struck by one of my pieces, they would inquire, “And how did you do that?”, a question never asked of a water colorist, or an oil painter.  And I would always reply to them, “Well,  I bring up the image on my computer screen, and then, using Photoshop, I begin to modify the image until . . .” And as often as not, before I had finished explaining my mental process of digital conversion, someone would respond, “Oh, you Photoshopped it” and then walk away.  See, I hadn’t really done anything. Photoshop had created the image.  So, finally, I began responding to the question differently. I would say, “Oh, I bought a device called the Adobe Magic Wand. And what I do is to bring an image onto my computer screen, wave the Magic Wand at the image and then sit back to await the final artistic creation. The Wand creates the final artistic image and then I just print it.”

And so my art work was transformed into the end product of a technical software process. See, there was no art involved at all.  I suppose you might call it “Fake Art”.

But then, what is “Art”?  I actually looked up the term on my computer, and wound up more confused than enlightened. Seems there is no useful definition of “Art”.  See, it’s pretty clear that the following image is called “Art” by almost everyone. Yeah, it’s that Van Gogh touch that gets them every time. 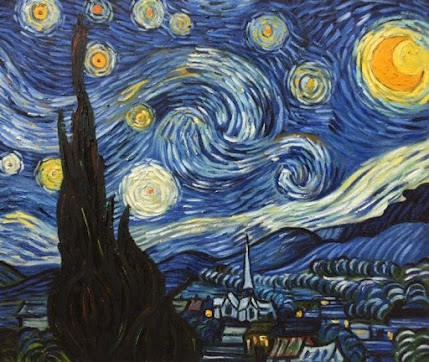 But then what of the following image? Is this “Art”? 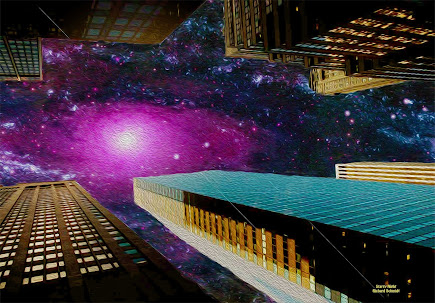 No? Well, then Why Not?  Oh, because it was created on a computer.  So, computer-generated “Art” is not real art? Well, many would argue, “No, the second image is definitely “Art”. Whether you like it enough to buy it is an entirely different question.  Now to be fair, most of us would not buy the first artistic creation either, but that would be because we couldn’t afford to buy it.

That raises the question in my mind, what is “Good Art”?  That is, suppose the first image had not been created by Van Gogh, but by Jimmy Humbert, living in Manhattan, and attending the PS 82 school. And Jimmy, liked to dabble, and had produced that image last week.  Would folks look at it and say, “wow, that is a handsome piece of art”. Or would they say, “Nice job Jimmy, keep it up and you may actually turn into a real artist some time”.

See, I look at many pieces of art, and say, “wow, that is really awful”, or “wow, that is definitely mediocre”. Or maybe, “Hmmm, another landscape that doesn’t even come close to the quality of my landscapes”.  And yet, people, including the cognoscente, might well, look at one of my landscapes and one of the others produced by a local landscape artist, and love his or hers, but dismiss mine.  And because that actually happens, and folks go around proclaiming some artist’s wonderful landscapes, I am drawn back to this question, currently unanswered, which is, “what is good art?” And I think the answer actually has something to do with people’s perception of what it takes to produce “real art”. Photographic art, Ansel Adams aside, I think is simply not viewed through the same “Art” lens as oil paintings, or water colors. And it has something to do with peoples’ perception of the relative effort to produce each piece. I think photographs are seen as the work of the camera and maybe the software, whereas the water colors or oil paintings are the work of a brain, eye and hand coordination, and a more artistic sense by the artist of how to combine color and texture and scenery.  That is, “Effort”.

And now that the pandemic has ended things called “Art Walks” and I have ceased producing pieces of art with my Adobe Magic Wand, I will likely never really discover an answer to the questions, “What is good art”, or even just, “What is art?” I think I shall never see a satisfactory answer to that question, but I do finally understand that apparently my “art” is appreciated by only a few, but a precious few humans on this planet.  If anyone wishes to view what I consider some of my “best” works of art (or pseudo-art?) you might check them out at my artsy blog. Go to

Do have fun. And remember that old Adobe Magic Wand.