So, the Taliban in Pakistan are afraid of a little girl.
How Pathetic are they??
They specifically targeted and then shot in the head Malala Youfsatzi, a 14 year old girl. 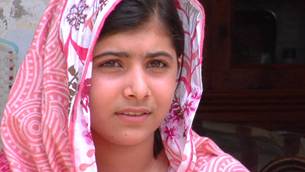 And what was her crime?? She promoted the education of girls. Wow! How heretical. Imagine that. A 14-year old girl wants to be educated, and wants other girls to be educated.  And for that, the cowardly Taliban shot her in the head. Aren’t they brave defenders of their faith . . . well no; they’re sniveling little cowards who disgrace the very concept of Islam.
The Taliban seem to be ignorant little people still living mentally in the 13th century; people without a moral compass. And people who are so insecure about their god, that they must kill little girls who wish only to become educated.
The Taliban leaders defile their religion with every breath.
May they all rot in hell.
Posted by artful notes at 9:57 AM