I use Adobe Photoshop. I have used Adobe products for several decades now and love them.  In the olden days, I owned a Nikon 35 mm camera that used actual film. Remember what 35 mm film was??? I bought a camera just prior to our move to New Delhi, India.  For a kid born in Brooklyn, and raised in Manhattan, India was an exotic land, and called out to me to record our lives there. I began by using both 35 mm slide film and black and white film.  I would have the film processed back in the US of A. I would send the film back via the APO to Kodak and receive from Kodak my slides, which we looked at in awe in New Delhi.  With the black and white, I would again send on the film and receive back a contact sheet showing the B&W pictures in slide size on a sheet of glossy paper.

It was all great fun and defined what I now know as “photography”.  Because I had no dark room, and digital systems did not yet exist, what you took with your camera was pretty much what you got on film.  Now, lest you scoff at our primitive approach to photography, I got a lot of really fine pictures, both in color and black and white.  See a few below. The first is my take on that iconic Taj Mahal at full moon and at first light. For the full moon, I had my camera on a tripod and took a ten-minute time exposure. Yep ten minutes. A few people who wandered by actually looked into the camera, and they said, “oh, you’re taking a picture”. But, because it was a ten minute exposure, they didn’t even show up. 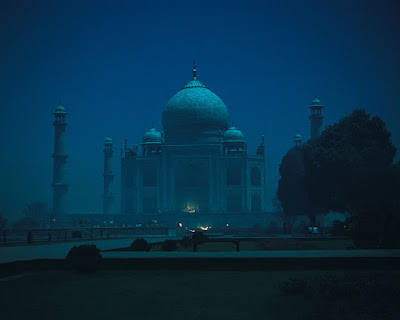 And then there is the Taj at first light. Another amazing sight. 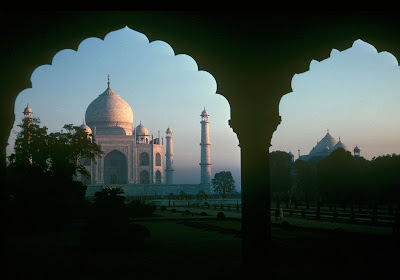 And then, as noted, I would periodically use black and white film to record scenes I encountered. Here is one of my favorites, recorded in an Indian village in the mid-1960s. A little child, sitting on a charpoy bed, with a hookah nearby.  That child is now in his mid-50s, assuming he made it that far. 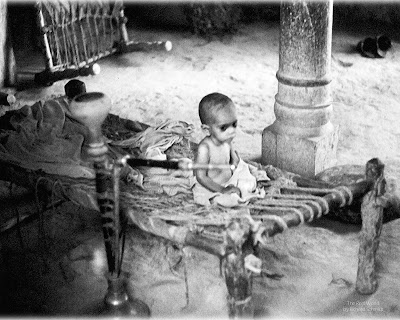 And then the digital world arrived, way after my return to America.  By then I had probably taken 3,000 to 4,000 pictures and had a nice collection—remember the 1960s rebellion here about the Vietnam War, continuing well into the 1970s? That was the stuff of pictures. Here’s a war protest group outside the White House, followed by a group protesting the indecency of poverty and racial injustice. 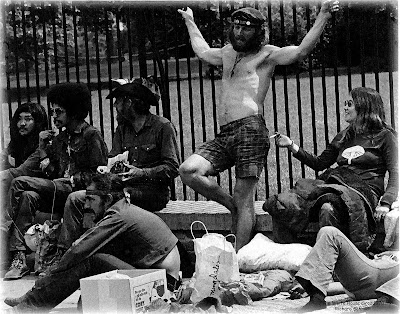 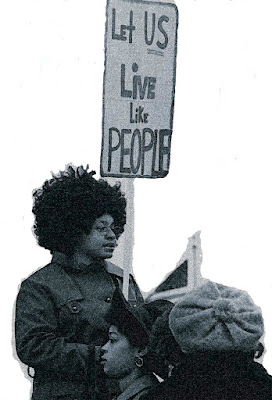 So many protests, so little time.  Right about this time, I also acquired a darkroom. What’s a darkroom, you might ask? Well, a darkroom was where I processed my film, producing black and white prints. No I couldn’t do color. For that, I still relied on good old Kodak.

And then, I acquired my first digital camera, spelling the end of 35 mm film. And, hard on the heels of digital cameras came digital software, spelling the end of my darkroom antics. Now the early versions of digital software photo manipulation were relatively crude. But I could process pictures on my recently acquired personal computer, and I could print out those pictures. All pretty amazing stuff.

And then, the software began its ascent (descent??) into the netherworld, where pictures began to no longer represent what the mind’s eye actually saw, but rather what the mind wanted you to Imagine.  Manipulation became the name of the game in digital photography. And there were no longer any limits on what one could pretend to have “photographed”.
How about a picture of two holy men, posing (NOT) on Fifth Avenue in Manhattan? 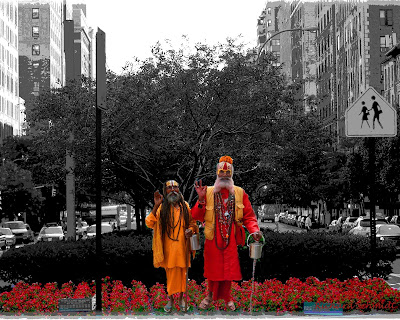 The ability to “photoshop” things that do not exist is now limitless, and the term itself has taken on a somewhat negative turn. I used to participate in things called Art Walks. Art Walks are events, where folks, patrons of the arts, can walk from shop to shop, or gallery to gallery and look at the artsy creations of local artists, sip some wine, maybe enjoy some food, and even perhaps, make a few artsy purchases of the observed art. I would display my digital art on a table or two in the gallery I was privileged to use, and folks would stroll by my table, admire some of my digital art, and often, inquire, “how did you do that?” See, I employed a combination of straight digital photography with Photoshop digital manipulation. I often placed an “oil painting” imagery on one of my pictures, so that the resulting image vaguely resembled one that had been oil painted. But as soon as I mentioned Photoshop, the response often came back, “Oh, you photoshopped it”. The intent of that comment was, “I see, you didn’t really create anything artistic. You let Photoshop do the work”.

I even got to the point that, when asked, I would reply, “well, I use the Adobe Magic Wand. I bring an image up onto my PC screen. Then I wave the Magic Wand at the image and the Adobe Wand creates something interesting on my screen, which I then print.” See, it’s all magic.

For one showing, I created an Image for fun, trying to promote the show in advance. I spliced the statue of Michelangelo’s David into a picture of the gallery we were using for the Art Walk. See what you will see if you attend our Art Walk??? 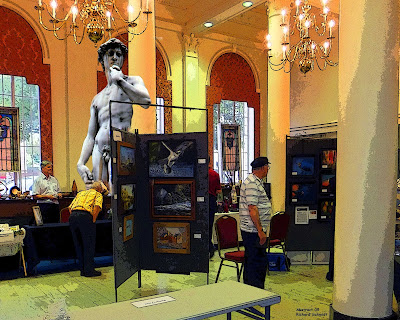 All in the spirit of good fun.
So gradually, over time, the old concept of photography morphed into this newer world of Make Believe. Now what does any of this mean?

Well, in olden days, if we viewed a water color, or an oil painting, it was clear that we were viewing an image that had been created in the artist’s mind. That image might exist in real life, of course, but it did not need to so exist.

But if we viewed a photographic image, we knew that the image being shown actually existed somewhere in real life.  Photographs revealed reality.  Now, with digital manipulation, photographs have diverged from reality. If we see an image on screen or on paper or canvas, we can no longer be certain that image represents some reality somewhere.  That image is also in the mind of the “artist”.
If we attend an Art Walk, it perhaps does not matter whether any of the pictures displayed there are real in any sense. It is only important that they are in some way pleasing, or entertaining.  But if see an image on TV, or in a book or newspaper, and we are asked to believe that image is reality, well, we can no longer be sure.  Now, we must examine who produced that image and ask whether the person is trustworthy.

And if the picture is accompanied by a written story, we can no longer accept that the story is true. Again, we must look to the source and validate.

And then we come to the written word itself. Can we believe what we read? Well, turns out, it depends . . . Depends on what precisely? Well, for one, it depends on who is saying/writing what we are reading. And it depends on the believability of the source material. If it is a newspaper, we might apply different standards for the New York Times, than for the Daily Mirror, or the Independent Tribune.  If it is TV, again different standards apply to “Fox News” than to the Public Broadcasting Companies, or even MSNBC, CBS, et al. We know TV “news’ is more opinion than “news”, but even there some opinion is more fact-based than others.  Listening to Hannity, et al, on the Faux News Network is akin to listening to Humpty-Trump Directly.

And so the world went on with its various sources of written, spoken words and imagery. And then came social media. First came Compuserve, a network where folks could send messages to one another without recourse to the telephone.  Then came the Internet and the World Wide Web. And rushing to fill the nonexistent vacuum came Social Media, Facebook, Instagram, Twitter and all the media wannabees.  And suddenly, we were presented with a vast array of pictorial and written information, on topics covering the world at large.  And now the word has been “photoshopped”. No longer can we simply believe what we read, because it is on TV, or on our PC screens. Now, everything we read is up for grabs.  Even if the subject is a legitimate source of inquiry, Facebook, et al, do not even pretend to any standards of fact. Facebook's Mark Zuckerberg does not even pretend to “truthiness”. He admits anyone and anything to coexist on his platform, because he has such high regard for the First Amendment, but even higher regard for the money he derives from companies and other moneyed sources wishing to lie to us on Facebook.  As a result, we can and should believe nothing we read on Facebook and others of that ilk, without first validating the sources, and the information being presented.

Unfortunately, in this new world of make believe there is no “artistic” standard we can apply, as in “Oh yeah, what he says is pure bullshit, but he says it with such artistry . . . pure poetry." Nope. Instead, we are left with pure garbage to sift through, and we must . . . MUST verify everything we now read, independently of the source.

And as we approach a national election in 2020, the source of all the material about to be thrown at us is vital for us to understand.  We must vote in 2020, definitely. But we must vote intelligently. That is, we must obtain information from sources we trust, and we must try to validate even those sources.

The entire future of our nation now rests in our hands. So, beware of this new world of Photoshopped words. Trust but verify are our new watchwords.  Maybe someday, we will be able to believe the written word again. But just not now. There are too many con men trying to deceive us. Be an intelligent guide to what you read.  Your grandchildren’s future depends on it.

Email ThisBlogThis!Share to TwitterShare to FacebookShare to Pinterest
Labels: Photoshopping